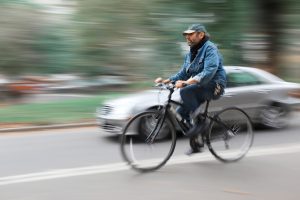 As more and more people discover how wonderful cycling is for fun, exercise and general transportation, the probability of bike accidents increases. Under the law, bikers have the same rights and responsibilities as any driver or passenger of a motorized vehicle, even though they have less protection on the road. We at Cyclist at Law know bicycling law inside and out and can help if you are involved in a bicycle accident.

According to the United States Department of Transportation, 726 pedal cyclists died in accidents in 2012. Pedal cyclists are defined as anyone riding a non-motorized vehicle powered only by pedals; this includes two-wheel road and mountain bikes, tricycles and unicycles. These cycling fatalities made up 2.2% of all traffic deaths that year and represented a 6% increase in the number of biking deaths over 2011. In 2003, 1.5% of all traffic fatalities were the result of pedal cyclist deaths.

According to a study by the Silicon Valley Bicycle Coalition, around 75% of drivers who kill cyclists or pedestrians are never even cited by the police. Other disturbing statistics from Bicycling in Austin are that hit and runs make up approximately 50% of all major car-bike collisions, and research indicates drivers in approximately 90% of car-bike accidents are at fault. If you are involved in a bicycle accident, get medical attention right away and don’t make any statements until you have spoken to an attorney in Dallas.

A biking accident can cause serious injury and even death. The majority of the time the driver of the car is at fault, but insurance companies often misinterpret the facts and try to avoid paying out claims. The attorneys at Cyclist at Law are experts at getting compensation for injured bikers. Contact us today at 972-932-1249 if you have been injured in a bicycle accident.