City of Richardson v. Phelps, 05-18-00753-CV (Tex. App. – Dallas, 2019).  I represented the cyclist.  In 2016, my client was on a casual social group ride called the “Sunday Roll.”  The group of 18 riders was rolling along at 16-18 mph on a Richardson street with a designated bike lane.  (See below.)  The car on the right squeezed the group to the left, including my client.  He didn’t see the lip because of the other cyclists.  He went down hard and was injured. 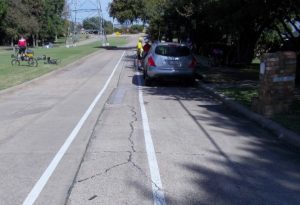 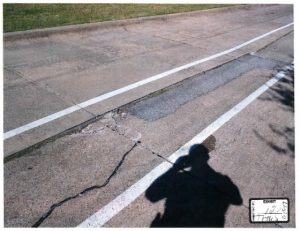 I argued that the hazard was a “special defect” for the intended user.  The Dallas Court of Appeals ruled otherwise.

As for the City’s actual knowledge of the defect, I was able to show that a cyclist had sent an email in 2014 with a photo to the City complaining of a defect in the same area.  The City then came out and repaired that defect.  After the repair, the bike lane was established and painted.    At some point before the incident (2016), the City tried to repair the lip as shown by the picture below.  This repair was done after the bike lane was created because the patch actually covered the right painted bike lane.  City employees testified to this fact as well. 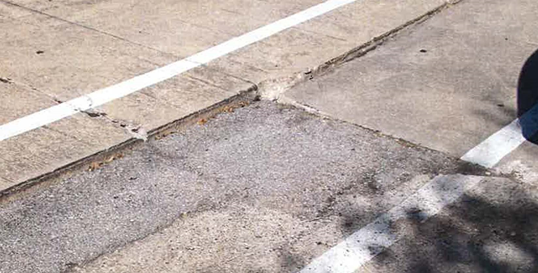 Sounds nasty.  In any event, the Court found that the hazard was not a “special defect,” but did find that the DPS had actual knowledge of the defect because the DPS maintenance employees admitted that they applied “crack sealant” in the hole and that it required at least 3 different employees to look into the hole to apply it.  In the opinion, the Court did not really deal with the timing of when the repair work was done.

Ms. Womac was badly injured.  Her medical expenses were $332,737.  She won at trial, but because of the Texas Tort Claims Act, she could only recover $250,000.  (Suing Governmental Entities is really tough.)