Dallas Bike Lanes or a Shift in the Zeitgeist? 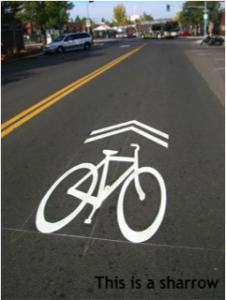 Maybe you have noticed these emblems in the roads with a bike and arrows.

These are called “sharrows” and they are there to advise motorists that bicyclists use that road. According to the Dallas Morning News, there are now 32 miles of roads with “sharrows.” These in and of themselves are great just to let motorists know that they must share that road with cyclists. Supposedly these will increase to over 100 miles in the very near future.

Some people want more than roads with “sharrows”, they want physical barriers between cyclists and cars. These involve “protected” bike lanes where the cyclists and cars are completely separate. At first blush, these seem to be a good idea, but just how will these work? You just can’t have separate roads for cyclists and cars. It’s simply untenable.

In other parts of the USA and the World, cyclists and cars can and do share the roads and do so peacefully. To me it appears that to a great extent, the answer lies in the attitude of the drivers, primarily of the motor vehicle drivers, but also the cyclists.

In North Texas, there are simply a lot of aggressive drivers that are unfriendly and angry. Small wonder that the DFW area was pronounced to be one of the least bike friendly areas in the United States by Bicycling Magazine in 2010.

However, I think this angry attitude is slowly changing simply because of the growth in numbers of cyclists in the area. “Sharrows” is an expression of that.

Additionally, and maybe more importantly, cycling trails and opportunities are a huge boon to businesses and the real estate in urban areas as evidenced by the effects of the Katy Trail in Dallas.   The economic effects of the Katy Bike Trail will hopefully cause the City of Dallas to take note of the positive business effects, and then put a lot more money into bike friendly projects.

Cyclists themselves can help in the overall change in the publics attitudes by not doing things that upset drivers. Obey traffic laws, don’t run stop signs, and make sure you are seen. Don’t hold up traffic on a busy street (find another street to ride on if it’s that busy). Be polite. Ride responsibly.

Riding responsibly takes some practice and experience. You had to learn to drive a car responsibly, and the same applies to riding a bike. The consequences of riding a bike irresponsibly are too great. It might be a minor impact for the driver that hit you, but it won’t be for you, the cyclist.

If you are involved in a bike accident, contact me, Bill Shirer at Cyclist at Law. Dial 800-887-6188 to schedule your initial consultation. I can help you recover your damages.